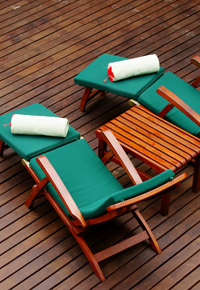 Customers often know exactly what they (think that they) want in a deck, including the gaps between the boards. However, most of them just don’t realize that just like a stopped watch is right twice a day, their preferred decking board gap will only be achieved during a portion of the year. As an organic product, wood moves, expanding and contracting with the seasonal shifts in moisture levels. As a result of such fluctuations — never mind geographic considerations — opinions abound within the industry, when it comes to this issue of gaps between boards.

Despite the frustrating reality of fluctuation, wood offers us this consolation: its movement is predictable. Since wood fibers act like a bundle of straws that sucks up moisture from the air, we can expect the board width to expand with increased moisture. Of course, prime deck-building season is during summertime, when the high humidity levels throughout much of the U.S. dictate that wood width is as swollen as it will be at any point in the year. 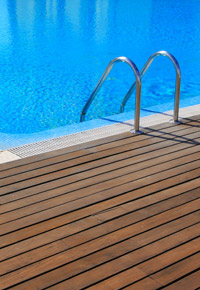 While each species moves a bit differently from other species, the movement properties of each is predictable, allowing you to plan for shrinkage based on the current temperatures and humidity levels, as well as the typical swing in the climate specific to your job site.

In addition to variations among wood species, you can expect different kinds of anisotropic movement, depending on the way the wood was cut. For instance, quartersawn boards move very little across the width, whereas flatsawn boards tend to move quite a bit.

(The differences are noted in the Popular Woodworking chart linked here.) 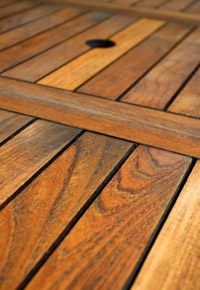 As you plan the gap between your boards, you’ll want to carefully consider the humidity level and time of year, as well as the species, realizing which direction the movement will go. For instance, if you are installing a deck in a humid climate during the summer, realize that the boards are as swollen as they will get, so placing them closer together will mean that you won’t have gaps later which will be wide enough for people to lose their keys or cell phones, even when walking across a snow-covered deck.

However, if you happen to install during cooler weather, that cool air can’t hold as much moisture, so your boards will probably expand later when temps are higher. If you place the boards too close to one another, you’ll lose more than your keys; you may lose out on the cost of that lumber when you have to rebuild the deck next year.

When it comes to ideal gaps, it’s really a personal choice, and whatever you or your customer prefers for when the gaps are widest, it won’t be that way during the season when they’ll use their deck the most. More important than the sizes of gaps is planning for the fact that gap sizes will change significantly throughout the year.