Surprising as it may seem, a new trend is emerging among artistically-inclined computer users: flash drives as fashion accessories. As the New York Times recently reported, “the designer flash drive has become an unexpected ‘it’ accessory, inspired by pop art, sold in museum shops and department stores, and produced in limited editions as if they were coveted fragrances.”

Who knew? Flash drives have long been seen as a simple, utilitarian device, yet manufacturers have recently begun developing custom flash drives with unique shapes, sizes, designs, and other specifications for personal use or as promotional items.

Flash drives as pop art are finding a receptive audience among the tech-savvy crowd who are willing to spend some extra money for an accessory which is at once fashionable and practical. The Times found that everything from Elmo and Santa Claus to Obi-Wan Kenobi and Darth Vader are popular designs for this new breed of flash drive, with creative touches one might not expect. For instance, the cap on the Darth Vader flash drive is Vader’s helmet and, when removed, reveals the human face of Vader’s original identity, Anakin Skywalker. Other flash drives come equipped with nail files, screwdrivers, blades, scissors, flashlight, and pens.

A handful of companies have been designing and producing customized flash drives in the UK, the US, and Canada for several years now. As flash drive technology has advanced, so has the functionality and usefulness of the drives, along with the creative designs and variations. Some custom flash drive makers offers standard models of drives which resemble credit cards, pens, or wristbands, each available in a variety of colors. When ordered in bulk, flash drives can be duplicated with identical designs and preloaded data so there’s uniformity across all the drives. 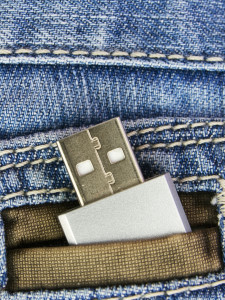 Technologically, flash drives have advanced by leaps and bounds over the past several years. The amount of data a flash drive is capable of holding is many times what would have been possible just a few years ago. This has made a flash drives vital tool for many computer users, who are able to transport large amounts of files from one computer to another with no hassle. Also, bulk flash drives can be preloaded with specific files of any type, such as pictures or video, adding to their appeal as a promotional item.

In a time when nearly everything can be personalized, perhaps it’s no wonder that flash drives should evolve into being a fashionable add-on for young people accustomed to distinct statements of individuality. Thankfully for them, there are a handful of manufacturers who are currently catering to this emerging market.