You might consider McIlvain Lumber an American tradition. Think mom and apple pie. Think stars and stripes; red, white, and blue. In fact, the McIlvain family first settled in what would become the United States of American, in the year 1740, a dozen years before Betsy Ross, the acclaimed seamstress of our nation’s first flag, was even born. That’s right, McIlvain Lumber was helping build America before that awe-inspiring flag had begun waving across her purple mountains’ majesty or amber waves of grain. Our company’s colorful beginnings are rooted in Colonial America and intertwined with key buildings that were foundational to our nation’s early history.

The first president of McIlvain Lumber could be said to be Hugh McIlvain. When he first began a lumber business outside Philadelphia, he likely wouldn’t have dreamed that 7 generations and over 200 years later, his legacy would live on. His risky choice of locale was along the Schuylkill River, west of the many already established “board yards.” Westward expansion during Philadelphia’s early urban sprawl proved McIlvain Lumber to be poised for growth.

While Napoleon was conquering in Europe and many exporters were floundering financially, McIlvain Lumber continued to expand. In fact, McIlvain lumber was used to build the Capitol and Supreme Court buildings, the White House, and the Smithsonian.

Expansion and specialization would be the company’s lot over the next century. Providing hardwoods for both individual craftsmen and the railroad, automotive, and shipping industries would become a significant part of the growing business. The year 1960 brought a new warehouse in White Marsh, Maryland, where the company’s headquarters still exist.
Closer to DC, Virginia, and Maryland customers, this prime location proved to be another healthy move for our booming business. Being just north of Baltimore made importing a natural progression, and J. Gibson McIlvain now deals both exotic and domestic wholesale lumber. McIlvain has partnerships with sawmills in Africa, Europe, and South America. 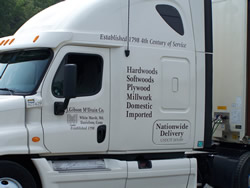 In addition to our headquarters in Maryland, we opened a lumber yard in Danielson, Connecticut, in 1980, in order to keep more ready-t0-ship inventory on hand. We also maintain an inventory in California, allowing us to ship almost any wood products we carry to anywhere in the country in less than 2 weeks.

The current president of the company is J. Gibson McIlvain III, and our international purchaser is Caroline McIlvain, a member of the seventh generation of McIlvains to continue this rich tradition of providing quality wholesale lumber. Despite our rich history, though, we at J. Gibson McIlvain Lumber fully realize that it does no good to rest on the laurels of our past success. Instead, we can build on that rich heritage and study the market in order to continue to secure the quality lumber our customers have come to expect from the name “McIlvain.”

Read from the McIlvain blog: