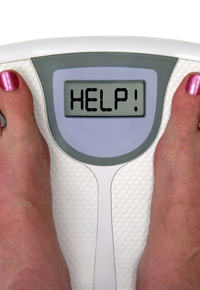 The epidemic of obesity has received no small amount of news coverage in recent years. Between 33 and 35 percent of American adults can be classified as “obese.” An obese adult is defined as someone with a body mass index, or BMI, of over 30. Those whose height, weight, and gender formulate into obesity have decreased life expectancy and increased risks of myriad health problems, such as the following:

But you probably already knew that. What you may not know is that obesity also takes a tremendous toll on those recovering from surgery and has a major effect on the circulatory system. These issues largely affect those considering orthopedic surgery.

Obese patients are at a major disadvantage when recovering from knee-replacement surgery. Because any weight on the surgically traumatized joint causes painful strain, at first, increased weight complicates the issue. As a result, obese patients tend to shift their weight to the side that wasn’t (directly) affected by the surgery. The imbalanced posture can play a role in over-stressing the non-surgical side as well as delaying healing of the surgically replaced joint.

A secondary issue that causes obese patients to have trouble recovering from surgery is that being overweight often correlates to a sedentary lifestyle. (This is especially true for the morbidly obese, those with a BMI between 35 and 50.) Such a pattern leads to muscle weakness, which, in turn, can cause pain. Because strong muscles allow forces on the joints to be dispersed, those with stronger muscles tend to heal more quickly and with less pain.

In addition to recovery from surgery, obese people tend to have problems with circulation to their extremities. Circulatory issues translate into the body’s decreased ability to heal itself; an obese person’s body tends to heal more slowly and less effectively than those whose circulation is unimpeded.

Those who could be classified as “morbidly obese” may have less-than-ideal joint positioning, due to the fatty tissue that causes the hips and feet to point outward, rather than straight ahead. While hip replacement may alleviate some of the pain, the positioning of the hip will delay complete rehabilitation and ideal functionality.

A good orthopedic surgeon will discuss the complications that obesity brings to the table before surgery is seriously considered. Because of the increased risks involved, some surgeons even refuse to perform surgeries on obese patients, instead prescribing a regimented diet-and-exercise program. Once patients lose the excess weight, they often see their original symptoms disappear and can sometimes eliminate the need for surgery, altogether.

If you’re overweight and are experiencing joint pain, the best thing you can do is to lose the excess weight. Chances are, you’ll experience reduced symptoms and eliminate the need to even visit the orthopedic surgeon’s office, altogether.

Daniel Baumstark, along with Christopher Cousins and Kira Davis, operate Washington, D.C.’s boutique physical therapy clinic, PhysioDC. PhysioDC is conveniently located in downtown Washington, D.C. at 1001 Connecticut Avenue NW, Suite 330. If you live or work in D.C. and need a reputable physical therapist, be sure to contact PhysioDC through their website (www.physiodc.com) or by calling (202) 223-8500.

From the PhysioDC blog