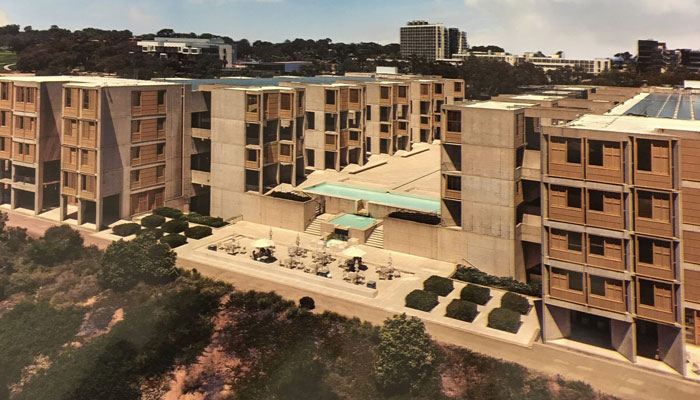 As we’ve discussed previously, value engineering is an extremely important aspect of planning your next build.  In the past we’ve looked at a value engineering case study using Walnut, and now we’ll take a look at a recent project we participated in using Teak. In any value engineering project, it’s important to remember that wood is a naturally occurring building product; in an age with many manufactured materials available, sometimes this issue requires careful consideration and adjusting our expectations — and our customers’ expectations — accordingly. (Additional issues such as wood movement and color matching also come up and are directly related to the expectations brought on in our age of manufactured materials.)

The case study we’re about to explore has to do with a recent historic restoration project which J. Gibson McIlvain Company was privileged to be able to participate in for the Salk Institute in San Diego.

Designed in 1965 by the famous architect Louis Kahn, the Salk Institute was a master work of concrete combined with Teak window walls. Unfortunately, fungi staining and weathering have caused the beauty of this work of art to become blemished in recent years. Under the guidance of the Getty Conservation Institute (GCI), we were able to help supply the Teak needed for this landmark restoration project. On a side note, J. Gibson McIlvain Lumber is among the largest U.S. importers of FEQ Teak lumber. Not only does this mean that we have a sizable inventory of Teak, but it also means that we have decades of experience in working with Teak and informing customers about its benefits and limitations.

Not only is Teak well known for its consistent, golden brown appearance, but it’s also exceptional in its durability for exterior use, even in harsh environments. With the Salk Institute’s ocean-front location, Teak was an excellent choice. However, we also realized that the project required some added finesse in sourcing just the right Teak that would coordinate with the original Teak used nearly a half a century ago. One goal of the restoration initiative was to reuse as much of the original Teak as possible; the General Contractor, Rudolph and Sletten, was able to achieve a remarkable degree of salvaging, retaining over 60% of the original Teak. (And that was a very good thing, since matching the remaining 30% or so new Teak needed to the existing Teak was difficult enough!)

Since the finishing technology available in the ‘60s was inferior to what we have available today, much of the existing Teak we were able to reuse was first restored. Most significantly, the marine varnish used actually worked to trap moisture and promote fungus growth, leading to unsightly stains. Other contributing factors involved in the rotting and staining of the original boards included lack of flashing and other currently well-known precipitation-shedding construction methods.

To learn more about this remarkable restoration project, take a look at Part 2.

Learn More About the Lumber Industry